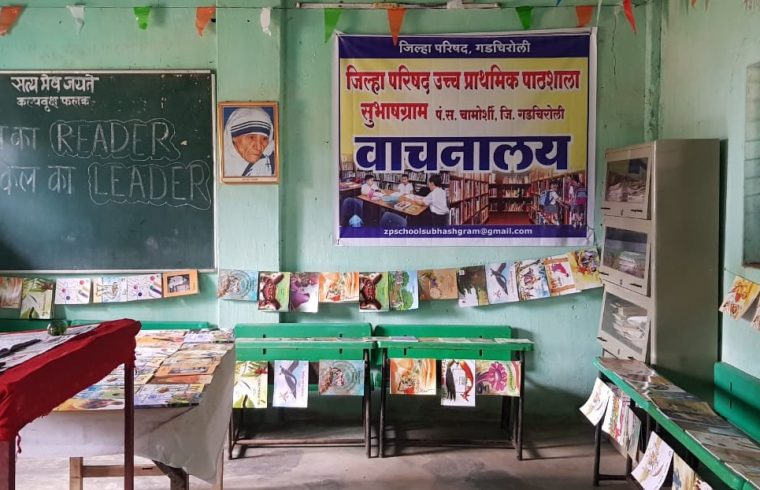 Piyush Shahi, Gandhi Fellow, Batch 2018-20 is working in Chamorshi block of Gadchiroli district of Maharashtra. His initiative is helping the schools of Subashgram cluster and promoting learning. Read on to learn about his journey to set up libraries with books in the language of the community- Bangla.

“Exploring leads to discoveries and discoveries lead to changes”, this holds true, in my journey from identifying and solving the issue of lack of books in Bengali for the children of the Bengali community in Subhashgram cluster in Chamorshi block of Gadchiroli district.

All this started when I began school visits to Subhashgram in the first week of March, starting with the Kendra shala (central School), where I learnt about the Bengali speaking community of Subhashgram, who’s story of migration from Myanmar to Gadchiroli district of Maharashtra, dates back to the year of 1952, since then they preserved the usage of Bengali as their mother tongue. Noticing the fact that the children of this Bengali speaking community, do not have access to library books in their mother tongue, and one school in the cluster did not have books in the library for the children to read, all this has moved me to work for this cause.

I decided to crowd-fund to collect funds to provide 8 schools with quality reading material in Bengali. Milaap is the first thought that stricken my mind, as Milaap is the most widely used crowdfunding platform in India. I created a link on Milap that talks about the cause I am collecting for, main stakeholders involved, the amount I wish to collect and the time period I want to collect that amount in. Once my link was active, I shared it among as many people as possible, to spread the word. I could manage to collect up to 3800 through this, but it was not enough, so I decided to approach the Block Education Officer (BEO), with this idea of crowd-funding, I asked if the teachers of the 8 Bengali schools, headmasters and even the children would become contributors for this cause by donating, with the BEO’s acceptance and partial-encouragement, I started collecting funds from the schools. This was the toughest part of the whole process, three schools rejected my idea and refused to contribute, so now the number of schools came down to 5, but I decided to keep going and was successful in collecting around 8000 INR from both Milaap and school’s contribution.
The next step was to purchase the books through a trusted source, and what could be better than the National Book Trust (NBT) for quality reading materials at reasonable prices. In the month of May, we ordered for 322 books for five schools. After collecting the books in the month of June, the next task was to distribute the books among five schools depending on the number of students in each of the schools. Hence, the ratio was made by dividing the number of books, i.e 322 by the total number of students i.e 315, therefore each student has one book to read and seven extra books were shared, one to each school.

I believe that a change isn’t a change unless it inspires others. So, I decided to scale this up and along with the BEO and the Kendra Pramukh decided to make the book distribution event a bigger one, that would include all the headmasters of the cluster, and this occasion would become a platform to convey the importance of library, it’s proper use, and how a good library can impact the learning levels of a child. The event was held on July 8, 2019 and it was indeed a success and saw a good number of participants and stakeholders involved, that included the gram sarpanch, the Kendra Pramukh of chamorshi as well. The event received an overwhelming response, the gram panchayath donated 5 thousand rupees to order more books for the central school, from NBT. Another thing I rejoiced was that the teachers of those three schools (that rejected my idea) approached me and asked me to guide them too to get books for their schools as well.

“Once the change begins, it is bound to go a long way”. This small initiative taken by me, with the help of the BEO, has inspired all the 23 headmasters of Bengali schools from different clusters of the same block, who attended that program, to make their libraries active. Hence, I am happy that the main objective of the event, that is to inspire other school teachers to bring a change in the library, was successful. The aim now is to scale this.